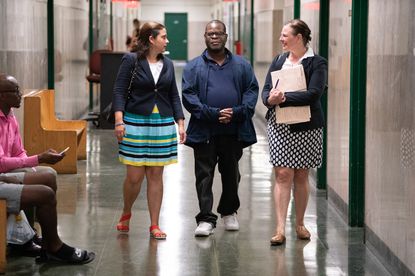 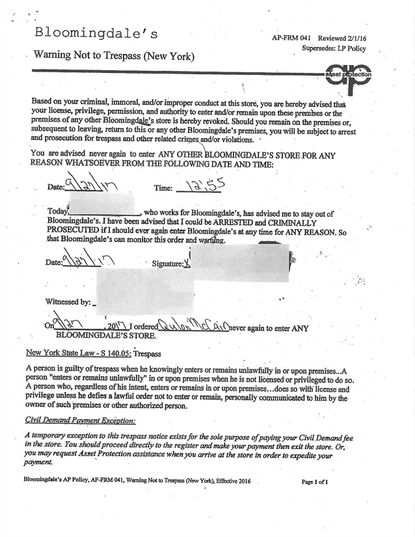 It wasn’t just about the four pairs of stolen socks. McCain’s mere presence in the store had the potential to put him in prison for four years.

McCain’s case was one of 47 handled by Manhattan public defenders in 2018 in what normally would be petty larceny charges which were bumped up to felony burglary in the third degree via a legal tactic commonly used by stores to thwart repeat shoplifters.

The practice, which New York County Defender Services says was employed last year by Bloomingdale’s and 13 other retailers, hits hard on mentally ill people like McCain, who has bipolar disorder and schizophrenia.

“I wasn’t feeling like myself. I was feeling like a spirit was just guiding me and getting me in trouble,” McCain, 43, told the Daily News.

He was off his medications, living on the street and using street drugs when the guard caught him with the socks.

McCain’s public defender, Thalia Karny, says her clients are often shocked when they learn what they thought was misdemeanor petty larceny — stealing less than $1,000 worth of goods — is suddenly bumped up to a felony punishable by prison time.

“When I meet a client and I tell them, ‘This is a felony;,you’re being charged with a felony,’ they don’t understand what I’m saying. They’re like, ‘What do you mean?’” said Karny.

The guard who stopped McCain on Nov. 9 showed him a piece of paper called a trespass notice, which was dated Sept. 27, 2017. McCain allegedly was stopped in the store that day in another shoplifting incident.

The notice advised him that if he ever returned to any Bloomingdale’s store, he was “subject to arrest and prosecution for trespass and other related crimes and/or violations.”

McCain says he didn’t understand what was going on. “They explained something to me, but me being high and intoxicated … I didn’t know what was happening," he told The News.

As for his 2017 visit to the famous Midtown store on Lexington Ave. at E. 59th St., “I had forgotten all about it,” McCain added.

Police from the 19th Precinct charged McCain with burglary in the third degree, a felony that carries a prison sentence of two to four years. He was indicted, and his bail was set at $2,500 cash.

“I think the shock kicks in when bail is set, because it’s a felony,” said Karny. “Then you have a situation where you are potentially facing a state prison sentence."

She added that the notice generally includes information regarding the “conduct that occurred in the store,” as well as a warning not to trespass, though the language varies in accordance with state laws.

Austin did not expand on the nature of the civil demand notice seeking a $500 fine, only that it “can be used in certain felony situations.”

McCain — who prosecutors say has 89 misdemeanor convictions on his record and 22 failures to appear in court — spent nine months on Rikers Island before his case was transferred to Manhattan’s Mental Health Court, where defendants accused of non-violent felony crimes may appear if they’ve been diagnosed with a serious mental illness.

There he pleaded guilty to burglary in the third degree and the lesser charge of misdemeanor petty larceny with the understanding that his charges will be reduced if he completes a court-mandated residential treatment program at Harbor House, said Emily Tuttle, a spokeswoman for Manhattan DA Cy Vance Jr.

Tuttle did not directly comment on the practice of raising petty larceny charges to felonies in the wake of a trespass notice.

Karny said clients charged with third-degree burglary because they’ve been accused previously of shoplifting often have mental health issues. McCain’s case is one of a few transferred to Mental Health Court.

McCain, who spoke to The News outside Manhattan’s Mental Health Court, said he’s fought an uphill battle with bipolar disorder and schizophrenia since his early 20s.

He’s had trouble holding down a job. He worked at a few places including Madison Square Garden, where he said he was hired as a security guard. Yet his earnings couldn’t cover his rent, child support and the medications that made him feel like himself.

He cycled in and out of homeless shelters where, he said, he was bombarded by drugs and alcohol brought in by others seeking refuge.

When he entered a psychotic episode, McCain lost his grip on reality.

“I was thinking people were laughing at me, people were trying to hurt me,” McCain said. “I get mood swings, I think people are after me sometimes, I hear voices talking to me telling me to do things that I’m not willing to do, that I don’t want to do.”

McCain said he would never have walked into Bloomingdale’s last November had he remembered being told never to come into the store again. If he had not been in a drug-induced fog due to efforts to self-medicate, McCain said, he never would have broken the law.

“The circumstances I had to go through, I’m not proud of it,” he said, shaking his head as he spoke. “But me staying clean now, I’m proud of that. I’m learning how to live soberly. That’s a big job.

“For me it’s one day at a time,” he added. "Some days I don’t feel like it, but I just push myself because I know I can get it and I like challenges. I’m like, I can do this.”