It started off as a tiny little hole in her bedroom ceiling.

Months passed. It got bigger. Her son’s breathing got worse.

Wendy Shine said she reached out to NYCHA management to get it fixed, but they didn’t do anything about the water leaking into her apartment, causing mold to fester where she slept, for almost two years.

Shine is suing the New York City Housing Authority for unspecified damages because, as she claims in her lawsuit, the leak and the mold it caused got so bad it made her and her 12-year-old son sick and eventually caused the ceiling in the Lincoln Houses to collapse on her.

“It took two years for them to fix it,” she told the Daily News. “They just washed it off the wall.”

While the leak and mold problems appear to have been resolved in her bedroom, Shine said a newer leak has persisted in her living room for months without a visit from NYCHA to repair it.

She is one of hundreds of city housing residents who have lodged complaints, or tickets as they’re known, with NYCHA’s management. Many have struggled over the years to have the Housing Authority address the problem — so much so that in 2013 the city submitted to a consent decree giving a federal judge oversight of the authority’s widespread mold woes.

“My client is one of many,” Shine’s attorney Richard St. Paul said. “This is a very important thing that has to get fixed.”

Shine, who worked in a Deutsche Bank mailroom for four years and recently started a new job as a custodian at Jacobi Medical Center in the Bronx, claims in her lawsuit that in January 2017, roughly two months after first noticing the leak, part of her bedroom ceiling collapsed onto her, tearing ligaments in her shoulder and causing her constant pain.

“I got injured. I was getting ready to take my son and them to church, and as I was standing over there doing my hair by the dresser, everything just came down on me," she told The News. 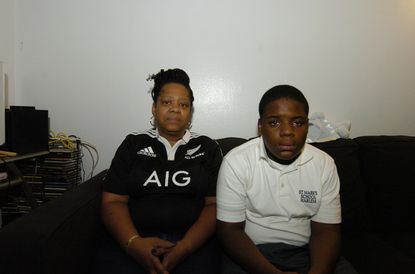 Her son, Christian Watts, 12, suffered from asthma before the mold began growing in his home, but said that since then, his symptoms worsened and that concentrating during class at St. Mark the Evangelist School where he attends 7th grade has become harder.

He now takes three different medications to assist his breathing, drugs with names that are hard to pronounce: albuterol through a nebulizer, fluticasone through an inhaler and montelukast.

“I had to take my medicine more. My head kept hurting,” Christian said. “I felt mad. I wanted them to fix it so my headaches could stop.”

A NYCHA spokesman declined to comment on both problems cited in Shine’s suit, as well as the recent woes she says have gone unaddressed.