A Harlem pastor who moonlights as a therapist has been charged with rape over accusations of trysts inside the church with a patient during sessions.

Kirton Lashley, 57, allegedly had sex with the victim, a woman in her 30s, during sessions beginning in October 2016 and lasting through December at the Beulah Wesleyan Methodist Church on W. 136th St. near Adam Clayton Powell Jr. Blvd.

Under the law, a person in the care of a medical doctor or mental health professional cannot consent to sexual activity with the provider. The criminal complaint against him does not describe any forcible conduct.

For more than two years the pastor and patient “engaged in a sexual relationship,” according to court papers.

Lashley was arraigned on charges of rape and sex abuse in Manhattan Criminal Court on March 19.

He was released without bail - and has continued to preach at Beulah Wesleyan Methodist Church since his arrest.

An order of protection bars him from any contact with his accuser.

In 2013, Lashley wrote a glowing one-paragraph endorsement praising the bizarrely-titled Christian sex book “Don’t Play with Me, I Am Life: Follow the Direction of Your Bishop (Penis),” written by minister J.L. Lewis.

The book “boldly explores and sheds light on how sexuality is intrinsically interwoven into fundamental facets of Christian doctrine,” Lashley wrote, adding that the “transformative” tome “has the potential to pinpoint and assuage the dissatisfaction felt by men and women in regards to sexual gratification."

Lashley’s lawyer Verena Powell told the Daily News that the pastor denies the allegations. She said she does not believe the accuser was actually a patient of Lashley’s.

“I don’t know how he came up on her radar,” Powell said. “I’m under the impression at one point in time she worked for him.”

Lashley is due back in court April 18.

On Sunday, more than a dozen parishoners gathered for a forgiveness themed Lent service at the church.

Langley, wearing purple robes and surrounded by a half-dozen gospel singers, reflected on the theme but never mentioned the accusations he faces. 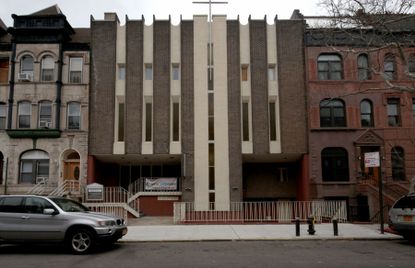 Lashley declined to speak to a reporter.

“He is not speaking. We’re not speaking,” the church’s choir director, who declined to give her name, told the Daily News. "There’s no story. We don’t want a story.”

A church source said Lashley had been pastor there for more than six years - and that his arrival drove people away.

“When he came here, half the church left," the source said. "They said, ‘I refuse to come and hear him.’”

Lashley is licensed to practice therapy by the New York State Education Department. A spokesman for the agency said he could not comment on Lashley’s case or the status of his license to practice because of confidentiality protections.

Allegations of misconduct are investigated by the a disciplinary board within the department after a legal process, the spokesman said.

If he’s convicted in the criminal case, the matter will be reviewed to the Regents Review Committee which can revoke his license or impose sanctions.

In his neighborhood, Lashley is seen as a friendly face and involved community member.

“When he comes in here he’a a good customer," said Mohamed Ahmed, who works at Best Way Deli. “But out there, I don’t know what’s happening in his life.”

Update: The charges against Kirton Lashley were ultimately dismissed and sealed.