Advocates and state and city officials rallied at City Hall Wednesday in support of stricter proposed state regulations on private schools and to condemn what they called four years of city failure to address educational deficiencies at yeshivas, religious Jewish schools. 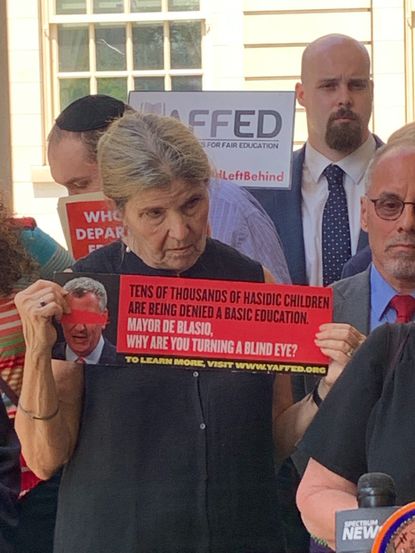 Naftuli Moster, executive director of Young Advocates for Fair Education and a yeshiva graduate, charged that a years-long city investigation of yeshivas accused of failing to meet state law has still yielded no results.

“For far too long, government authorities have done nothing as tens of thousands of children in Hasidic and ultra-Orthodox yeshivas have been denied a basic education,” Moster said at the event, also attended by Councilman Daniel Dromm and state Sen. Robert Jackson.

“The city’s foot-dragging on the investigation is an example of this indifference," Moster added.

Critics have claimed many yeshivas fail to offer basic English or math instruction after the early grades, focusing almost exclusively on religious instruction and leaving students unprepared to enter college and the workforce. Many of the schools receive some public funding.

“He’s never written a book report, or a short story or a composition," she said.

The city launched a probe into the teaching at almost 30 yeshivas in 2015, but hasn’t yet released the results or provided a timeline for making them public.

“We’ve visited every school in this inquiry and are now working with them to gather important documentation and followup information” said city Education Department spokesman Will Mantell.

The state Education Department released new guidelines last November that would give local school districts deadlines for completing investigations of private schools accused of flouting state law. The proposed rules are now open for public comment, and the Board of Regents will vote on them this fall.