The five giddy tourists aboard a doomed “doors-off" sightseeing helicopter joked and laughed in the minutes before their deaths last year in an East River crash, according to a newly-released transcript of the flight.

Barely 15 minutes later on the evening of March 11, 2018, a confused passenger asked for help in escaping the safety harness holding her in place as water started flooding the crashed copter.

“How do I cut this?” the passenger asked in an exchange captured by a GoPro camera installed inside the FlyNYON helicopter. The woman was sitting near one of the helicopter’s open doors at the time of the crash.

In comments included to give context to the audio, the National Transportation Safety Board transcript describes another passenger grabbing at the shoulder strap of his harness, with his image disappearing when water covered the lens of the GoPro. A third passenger looked downward at the restraint still holding her in place, with her headset eventually slipping over her eyes as the copter went underwater.

The passengers were all tightly harnessed inside the chartered Liberty Helicopters flight — with Sen. Chuck Schumer and other critics suggesting the heavy-duty straps perhaps ultimately prevented their escape from the downed craft.

The mood aboard the flight was initially festive as the pilot and his five passengers headed into the skies above the city at 6:46 p.m. One of the passengers began joking about a fellow rider’s pre-flight preparations.

“He had like five Bloody Marys before we took off,” the first passenger says.

“Yeah, yeah — I am,” the other passenger replies. “I am a little twisted.”

Jokes about the television show “Rick and Morty" ensued, with one of the passengers telling the rest to “get schwifty” — a line from the program that loosely translates as “have a good time.” 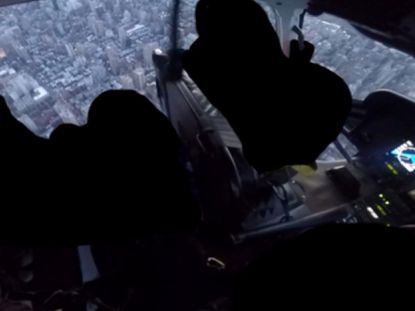 The transcript, made from the GoPro camera mounted on the copter’s ceiling, begins before the flight takes off and continues until the device goes underwater.

“Smile at the camera guys, it’s looking at you,” a FlyNYON “customer experience representative” tells the five passengers just before takeoff.

Helicopter pilot Richard Vance, the only survivor of the flight, told investigators that a tether meant to protect the passengers somehow became caught on a fuel shutoff switch, shutting down the engine.