Police on Friday released surveillance photos of four suspects wanted for fatally shooting a man in Harlem amid the horrific spree of city gun violence that scarred the Fourth of July weekend.

Victim Stephon Johnson, 23, was shot in the lower back during a July 5 block party on W. 116th St. near Morningside Ave.

He tried to run but collapsed three blocks away, on Manhattan Ave. near W. 118th St. A friend scooped him up into a car but crashed near 110th St., at which point police showed up.

Johnson later died at Mount Sinai Morningside, one of nine people killed on July 5. At least 48 other victims were wounded the same day in shootings across the city.

It wasn't clear why Johnson was killed. 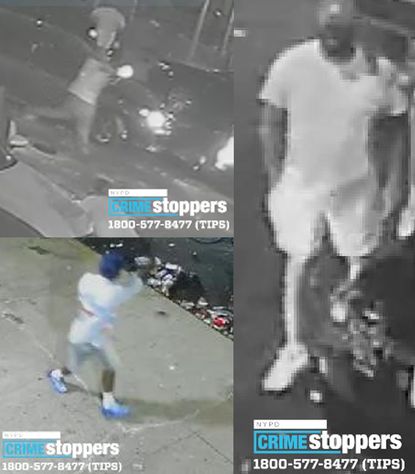 His elementary school teacher remembered him fondly on a GoFundMe page raising money for Johnson’s funeral.

“Stephon made a lasting and beautiful impression on his elementary school alma mater,” wrote Jeneca Parker, the principal of Public School 180 in Harlem. “The teachers and staff are thankful to have been a part of his life. He will be deeply missed.”

Anyone with information about the suspects is asked to call Crime Stoppers at 800-577-TIPS. Spanish speakers should call 888-577-4782. All calls will be kept confidential.