A Florida man on a “mission” was arrested Saturday after he plowed his minivan into an Ocala church, then set fire to the building.

Steven Anthony Shields, 24, “intentionally crashed” through the front doors of the Queen of Peace Catholic Church around 7:30 a.m. Saturday, then poured gasoline out into the foyer area and lit the fire, according to the Marion County Sheriff’s Office.

“Several” parishioners were inside preparing for morning services, but all were able to escape unharmed, police said.

The fire was quickly extinguished, but damage is unclear.

Police caught Shields after he fled the church and has been charged with one count of attempted second-degree murder, one count of arson to a structure, one count of burglary of an occupied structure and one count of felony fleeing or attempting to elude. He is being held in the Marion County Jail on no bond. 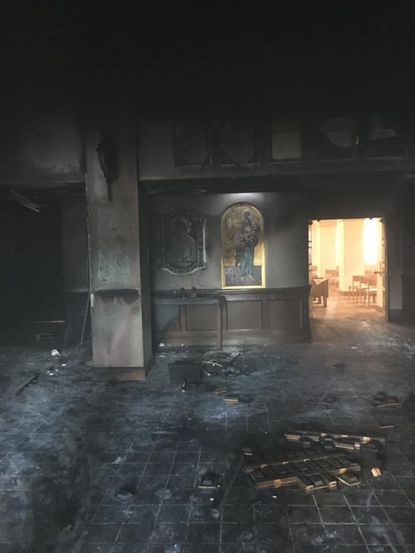 Shields told police that he has been diagnosed with schizophrenia and was not taking his medication, according to the Ocala Star-Banner.

After his arrest, Shields allegedly referred to himself as the “king” and told police he was on a “mission.”

“Our freedom of worship granted in the Constitution is a freedom that we all hold dear,” Sheriff Billy Woods said in a statement.

“My deputies and I are sworn to protect that right and will always ensure our citizens can worship in peace. I’m proud of my deputies for capturing this man so quickly and we appreciate the assistance from all of the state and federal agencies that worked alongside of us during this investigation.”