Five people were hurt Saturday when a chain-reaction crash slammed a NYPD car into a Brooklyn storefront, police said. 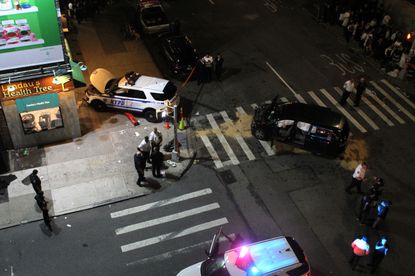 The police car — video shows its lights and sirens were on — was struck about 9:45 p.m. by a 2016 Honda Odyssey at the intersection of 52nd St. and 13th Ave. in Borough Park, said police.

The police car then hit two 19-year-old women on the sidewalk in front of Laudau’s Health Tree, a health food store.

One of the women was pinned beneath the police car, said Klein, 30.

About a dozen bystanders ran over to lift the car so the woman could be freed.

“It’s very scary to see them trying to pick up the car,” said Klein. “The guys were just lifting to try to free her.”

The second woman was conscious, and sat against a wall of the building, he said.

“The girls were screaming very loud. It was very scary. They were in shock,” said another witness, Jacob Klein, 27.

Video posted on Twitter shows a crowd of neighborhood first responders as a victim was put on a gurney. The crash happened in the Jewish neighborhood hours after the Sabbath.

The two women were taken to Maimonides Hospital with minor neck and back injuries, said police.

Two officers in the police car who suffered neck and back injuries and the driver of the Honda were also taken to Maimonides. Their injuries were also minor, police said.