He survived the horrors of 9/11 — only to end his FDNY career at the scene of a massive inferno allegedly caused by a greedy landlord.

Retired Battalion Chief Edward Tierney suffered crippling injuries while battling a 2015 fire in the East Village that killed two men and injured about a dozen others — a tragedy for which a landlord and two workers she hired are now on trial.

Prosecutors say the defendants are responsible for an explosion that resulted in a deadly blaze that leveled three Second Ave. buildings by illegally re-routing the gas line in a selfish plan to skirt safety requirements and quickly put vacant apartments on the market.

Tierney, 67, a first responder to the World Trade Center on Sept. 11, 2001, testified Wednesday after attending a 9/11 memorial service at his former Harlem ***NU***fire house, telling jurors that the injuries he sustained on March 26, 2015 required several surgeries.

Tierney said he was struck several times at the scene by falling debris and later fell down, further injuring himself. Since then, he said, he underwent two knee replacements, a left shoulder replacement and a right hip replacement — a series of surgeries that "ended my firefighter career” and keeps him in constant pain. 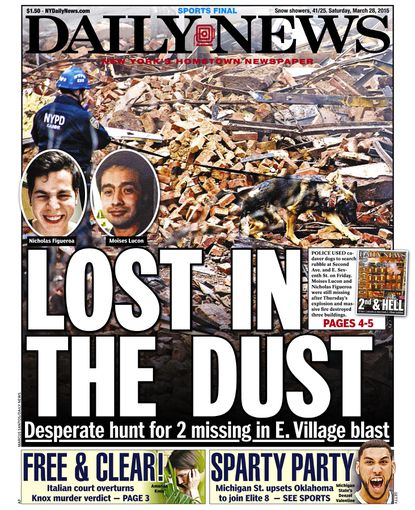 “It was a complete life-changer for me. I’m not the person I was after that through all the surgeries I had. Not even close, he said at the Manhattan Supreme Court trial.

Maria Hyrnenko, 59, who owned the building that went up in flames, is on trial for manslaughter, criminally negligent homicide, assault and other charges related to the deaths of two men and the injuries of 13 others, including Tierney.

Also charged are Hrynenko’s general contractor Dilber Kukic, 44, and Athanasios (Jerry) Ioannidis, 63, an unlicensed plumber accused of carrying out the shoddy work. They are charged with rigging an illegal gas line at 121 Second Ave., which housed a ground-level sushi restaurant.

Recent college graduate Nicholas Figueroa, 23, who was paying his bill at the eatery at the time of the explosion, was found dead amid the rubble days later, as was restaurant employee Moises Locon, 26.

Tierney and two additional FDNY members have a pending lawsuit against Hrynenko, Kukic, his company, Con Edison and other parties.