Family, Queens community mourn man fatally struck by car just blocks from spot where his wife was injured 7 months ago

A tight-knit Queens family was reeling Sunday after the death of a retired watch repairman who was mowed down on a busy Kew Gardens Hills roadway — exactly seven months after his wife was struck and injured on the same street, blocks away.

Elou Rakhminov, 75, was killed Saturday night crossing Jewel Ave. near 140th St. The 30-year-old driver remained at the scene, and no charges were immediately filed.

“She was injured badly, she’s still recovering,” said the stunned daughter. “She had a broken leg.”

“He didn’t deserve this,” she added, sobbing.

On Sunday night, about 150 friends and relatives filled the TOV Bet Midrash temple for the funeral of Rakhminov, who came to the United States from Uzbekistan in 1991 — and to comfort his inconsolable widow as she wept at the front of the room while a steady stream of mourners walked up the narrow aisle to embrace her.

One of several speakers from the community hailed Rahkminov as “an unbelievable person that really wanted to fulfill, as the rabbi said, his mission." 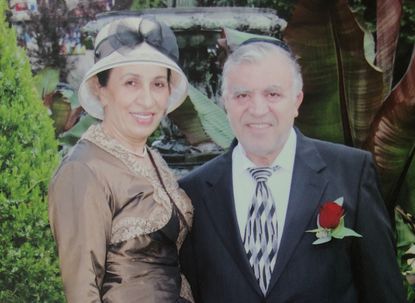 “This picture that we have here is exactly, exactly who he is. Smiling, nice. A person who has the light on his face," the mourner said.

A Psalm of David was sung later in the service, punctuated by outbursts of weeping from the congregation.

“We got the message and came from Brooklyn,” said Raisa Ariyeva, who grew up in Rakhminov’s hometown of Kattakurgan. “I’ve known him all my life. I went to school with his daughter.

“They lived across the street from us. Our doors were never locked. We used to just walk into each other’s house,” she recalled. “The whole town lives here now. Even back home, anything happens we are all together. So it’s the same here.”

“The last time I saw him was two weeks ago," Katayev said. "He had an antique that I hadn’t seen since childhood. A bike from years ago, a Soviet bike. He was riding it. He offered to let me ride it because I hadn’t seen one since I was a child."

Rakhminov had shipped the bicycle, a Ural, when he left Uzbekistan and rode it regularly in Queens, friends said.

“Every year, he would ask ‘Do you need matzah? We have beautiful matzah’,” she said of his offering from a bakery in in Williamsburg.

Badalov said she slowly began to realize that Rakhminov made the offer of matzah to many people in their tight-knit community as a mitzvah, or good deed.

“Last night I didn’t sleep, I was turning and turning," she said. “I was shocked.”

Afterward, as some left to bury Rakhminov, others came to his home, filling a dining table with food that mostly went ignored.

“He cared a lot for nature, making sure birds got fed, especially in the colder months. He was very compassionate,” daughter Basanda said. “He made sure people had food, homeless people, elderly people.”

His niece, Elena Yakubov, 40, added that her uncle was “very involved" in the temple.

“Caring, considerate, with a big smile," she said.