Despite his sketchy past, Nayquan Garden saw a bright future: Fatherhood, a growing bank account, maybe a house of his own.

The 29-year-old dad-to-be’s dreams died when Garden was gunned down early Thursday while headed out for a late-night sandwich and soda. As he walked out the door, his sister recalled, Garden shouted “I love y’all!”

He never returned to the family’s Upper West Side home.

“My son did not live by the gun. Why did he have to die by one?” his devastated mom Dieosa Garden asked hours later in the family’s apartment.

“He was bettering himself,” said the sister, Satora Goodwin, 34, as her family struggled with his sudden violent end. “He was excited to say, ‘I’m having a baby.' No matter what anybody did in their past, when you can physically see it, that means something.”

Dieosa Garden recalled the ominous feeling that swept over her around 3:15 a.m. as she took a cab back from a late dinner and passed the crime scene at W. 105th St. and Columbus Ave., two blocks from home.

Her worst fears were confirmed when she asked the cabbie to stop, and she spotted her mortally-wounded son looking out from the rear of an ambulance. Those were her final words to Nayquan — who was planning an Aug. 14 gender reveal party with his baby-to-be’s mom.

Cops determined Garden had been shot on the grounds of the Frederick Douglass Houses, a block from where they found him mortally wounded. He was pronounced dead of a gunshot wound to his chest.

The dead man’s dad Michael Walker suggested a gambling dispute as the possible motive for the killing. 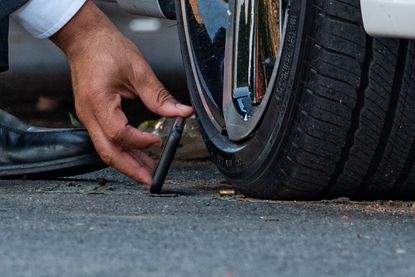 “This is getting to be ridiculous, man,” said Walker. “For someone to target you over a dice game?”

Garden was paroled from state prison in 2016 after doing five years for attempted robbery as a hate crime, assault and sale of a controlled substance, records show.

For his sister’s birthday two days before his death, Garden showed up with a bottle of Moet champagne and a $2,000 cash gift, family members recalled.

While relatives acknowledged that Garden was once involved in drugs, his mother insisted he never carried a weapon while on the wrong side of the law.

The impending arrival of his child seemed to fill him with a new sense of responsibility, said to his sister. “He got out and got on the right road,” recalled Goodwin. “He was looking for a job. He said that he was going to buy a house for him and his kid with the money. He was so excited to show me that he was getting his credit (rating) up.”

There were no immediate arrests in the slaying.

The dead man’s mother said she was just torn up by the slaying of her son, and that she’s now afraid to go outside.

“It’s crazy — you can’t eat, you can’t sleep, you can’t go to the store anymore,” she said. “He didn’t hate. He liked everybody. He gave to everybody.”