An NYPD detective accused of misconduct in the Harvey Weinstein probe repeatedly backdated notes on the high-profile investigation, including key witness interviews, and allegedly lied on the stand in an unrelated sex crime case years ago, the Daily News has learned.

Det. Nicholas DiGaudio testified in a 2011 sex case that a Spanish-speaking suspect gave him a full confession in English, according to a sealed April 23 letter written by prosecutor Joan Illuzzi-Orbon to Weinstein’s defense team and obtained by The News.

But DiGaudio’s testimony was contradicted by the suspect, who swore that a bilingual detective in the room had actually “berated and yelled at him in Spanish" in a failed bid to secure an admission of guilt, according to the letter.

The suspect, testifying in Spanish through an interpreter, insisted that he “refused to admit to any wrongdoing," the letter continued.

But DiGaudio claimed that he was alone in the interview room with the suspect, asserting the man spoke English and never asked for an interpreter before confessing to the charges. The NYPD found no wrongdoing by DiGaudio. The suspect was subsequently acquitted at trial, the prosecution letter said.

The contradictory stories about the 2011 sex case were initially revealed when the suspect was prosecuted in 2013 on a separate sex crime, the assistant DA’s letter recounted. The second detective at first confirmed that he was in the room with the suspect, addressed the man in Spanish and translated for DiGaudio, the letter stated.

Pressed by investigators, “DiGaudio said that he and the second detective simply have differing recollections of the 2009 interview,” according to the DA’s missive.

“The NYPD Internal Affairs Bureau was aware of the allegation and conducted a joint investigation with the Manhattan District Attorney and the allegations were proved to be unfounded," Conforti told The News. 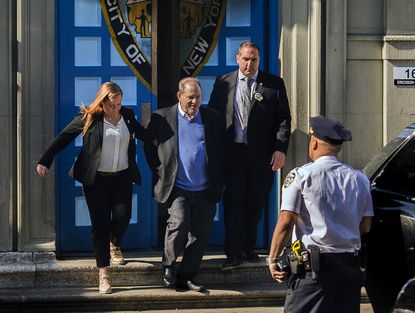 But it’s not the first time DiGaudio’s come under scrutiny.

DiGaudio, now 46, was walking alongside Weinstein when the movie mogul was marched into Manhattan Criminal Court following his May 25, 2018 arrest for rape and sex abuse. Weinstein and his former film company have since paid $44 million to settle some of the civil lawsuits filed against him by his alleged victims, though the criminal case is still pending.

Last October, ex-lead investigator DiGaudio was accused of advising a witness in the high-profile case to keep quiet about doubts involving one accuser’s tale of an alleged sexual assault by Weinstein, leading to the dismissal of charges in the portion of the prosecution involving alleged victim Lucia Evans.

The DA’s officer later acknowledged DiGaudio — removed from the investigation late last year — had also advised an alleged Weinstein rape victim to delete items from her mobile phones before turning the devices over to the cops.

And NYPD documents viewed by The News also indicate that DiGaudio was sloppy in chronicling key elements of the Weinstein case — including the backdating of some paperwork in the probe of the disgraced ex-Hollywood bigwig and Oscar-winning producer.

In one instance, he flew to Beverly Hills, Calif., in February 2018 and interviewed a woman who alleged that Weinstein raped and sexually assaulted her on three occasions in 2012 and 2013. But DiGaudio did not enter the notes from the interview until three months later, just 10 days before Weinstein was arrested, according to records obtained by The News.

His supervisor, Sgt. Keri Thompson, did not sign off on the notes until two months after that, the records show.

In multiple instances, DiGaudio wrote in investigative reports that he had entered notes into the case management system in February 2018. In fact, time stamps in the system indicate he entered the notes in May 2018.

And Thompson again did not sign off for two months after that.

The News spoke with four NYPD detectives who said DiGaudio’s actions were well outside long-established guidelines for case work.

“This is a case being followed worldwide and they’re backdating their reports?” said one veteran detective. “In a normal situation, they would be transferred in a heartbeat, but the detective is guided by everyone else on up the chain.”

A second veteran detective said a delay of up to two weeks might be reasonable, but three months is not.

“What were you doing?” he wondered. "Where’s your supervisor? A high-profile case like this, you dot your i’s and cross your t’s. If I’m the defense lawyer, I’m going to beat the hell out of him on paperwork alone.” 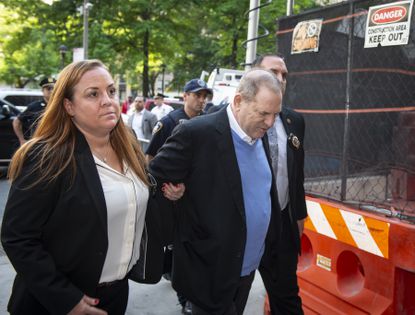 The NYPD declined to comment in detail on the paperwork. A police official said that time lags in investigation record-keeping are “not ideal,” but they do occur. The official also said lapses in the administrative documentation doesn’t mean the investigative steps didn’t happen on the date indicated.

Illuzzi-Orbon’s letter also references an investigation into accusations made by an anonymous source against Thompson, including the acceptance of two $1,000 Yankees tickets from a lawyer for model Ambra Battilana Gutierrez, who in 2015 accused Weinstein of groping her and later wore a police wire in an attempt to get him to confess. The gift was supposedly a thank you for ferrying the model around during the investigation.

Thompson was also accused of leaking the tape made by Battilana to journalist Ronan Farrow and of misconduct in supervising DiGaudio in the Weinstein case.

NYPD spokeswoman Devora Kaye denied “any Special Victim member” received tickets from the lawyer. And she said there’s no evidence that Thompson leaked the tape to Farrow, although an investigation continues.