A multi-millionaire tech executive’s assistant — caught embezzling $90,000 from his boss — answered an offer of amnesty with a Taser, a knife and an electrical saw, killing and then dismembering the man, sources said Friday.

Tyrese Devon Haspil, 21, was charged with second-degree murder in the gruesome execution of Fahim Saleh inside the victim’s $2 million Lower East Side condo. He was ordered held without bail at arraignment early Saturday in Manhattan Criminal Court.

A relative discovered Saleh’s body in the apartment two days after the killing, cops said.

A bizarrely-dressed Haspil and his victim were caught on surveillance video riding the private elevator up to Saleh’s seventh-floor apartment at about 1:45 p.m. Monday.

The global entrepreneur had fired his underling — and also offered him a chance to make restitution and avoid criminal charges, sources indicated.

Haspil — wearing a ninja mask, suit and tie — instead turned on Saleh, using the Taser to immobilize his 33-year-old boss before repeatedly stabbing him in the chest and later carving him up with an electric saw, sources said.

Haspil left behind some clues: He used a credit card to purchase the saw, and a Taser prong recovered from Saleh’s body bore a serial number connecting the suspect to the murder, sources indicated. 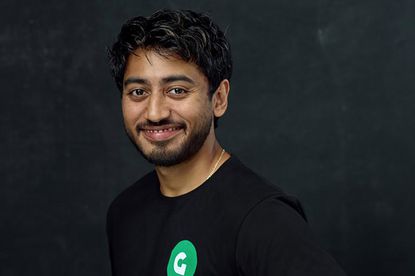 Cops said Haspil returned to the apartment Tuesday, intending to dispose of the butchered body and clean the gore. But a cousin of the victim instead came by and discovered the body — with no arms, legs or head — as the suspect fled down a staircase, sources said.

The power tool was left inside the E. Houston St. condo where the victim’s mutilated remains were left in the living room. The killer “left before he finished the job,” a source said earlier in the week.

Haspil’s duties included handling Saleh’s finances and personal business, according to sources. It was unclear exactly when he was fired.

“All I know is he is a very good kid,” said an elderly woman who knew the suspected killer. 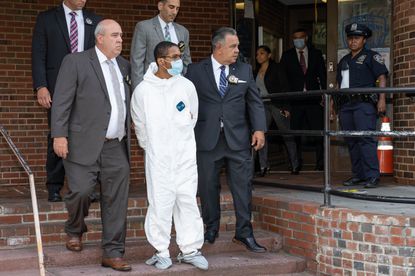 Haspil, wearing glasses with his hair cropped short, was led from the 7th Precinct in a white Tyvek suit, face mask, handcuffs and leg shackles. He remained silent, ignoring shouted questions from reporters, but kept his head up while walking slowly with two detectives.

His arrest hours earlier at a Manhattan apartment ended a three-day search. A source indicated that Haspil, who has no prior criminal record, asked for a lawyer right away and made no statements to police.

A distraught friend and business partner of the murder victim arrived outside Saleh’s apartment to drop off flowers in his memory hours after the bespectacled suspect was taken into custody. The woman was too overcome with grief to speak.

Saleh, rather than going to the NYPD about the missing money, was willing to work out a deal where Haspil could pay back the cash without repercussions, sources said.

But the plan fell apart when the assistant responded to his boss’ kindness with savage cruelty, the sources said.

NYPD Chief of Detectives Rodney Harrison, after a short afternoon briefing, took no questions from reporters on Friday about the high-profile murder.

Stunned Brooklyn neighbors of the suspect, used to seeing Haspil in the building gym or the elevator, watched in disbelief as detectives descended on his apartment near Prospect Park. 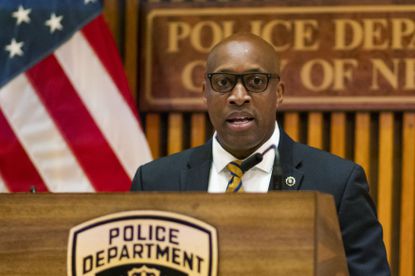 “To think the guy who may have done this lived two floors below me,” said photographer Lisa Hancock, 53. “It was just so brutal, and it sounds like it was planned ... It’s shocking. It’s crazy.”

A detective knocked on the suspect’s door around 9:30 a.m. Friday, later leaving the building with a woman who was inside the apartment.

Saleh, co-founder of the Nigerian motorcycle ride-sharing service Gokada, was a precocious businessman who launched his first company as a teen. The graduate of Bentley University in Waltham, Mass., was also involved in ride-sharing operations in Colombia and Bangladesh.

“There are no words or actions to provide any of us comfort except the capture of the person who exhibited nothing short of evil upon our loved one,” his family said in a statement to the Daily News on Thursday. 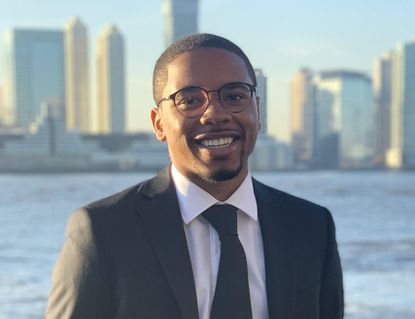