Hundreds of mourners crowded a Brooklyn church Saturday for the heartbreaking funeral of a 10-year-old boy mowed down by an out-of-control car at a city bus stop — embracing the parents devastated by the crushing loss of their only son.

An urn with the ashes of Enzo Farachio was placed near the altar surrounded by blue and white flowers, as the boy’s sobbing mother, Mary Majao, and father, Angel Farachio, sat through the Mass at Our Lady of Refuge in Midwood, surrounded by 200 friends and relatives.

The couple, who did not speak at the service, stood outside the church afterward as mourners— many from Public School 316, where Majao teaches second grade and where Enzo attended before starting middle school this September — hugged and cried.

“She has been teaching there since before he was born,” said Lawanda Innocent, 37, whose 10-year-old son Jaden had been friends with Enzo since 3rd grade.

“He was always at the school because Mary worked there,” she added. “He grew up there. Everyone knew him." 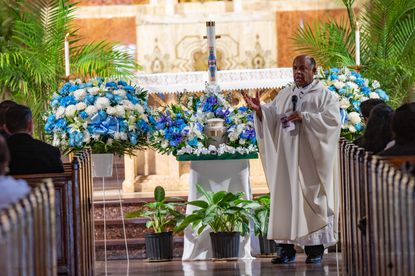 Jaden praised his pal as “the most quiet, most innocent person in school.”

“He was nice, he was smart, people at school really liked him," Jaden said. "He had a lot of friends at school. He liked to play all kinds of games.

Enzo was on his way home from Intermediate School 240 on Sept. 10 when an out-of-control Lexus SUV mounted a curb and plowed into him on Ocean Ave. at Ave. L. The driver, Alexander Katchaloff, 59, may have suffered a medical episode when he lost control, authorities said. The sixth-grader usually took a yellow school bus, but on the afternoon he was killed, he was waiting for a city bus home.

“This was only his 4th day of school at a new school,” Innocent said. "He and his class graduated from PS 316 in June. So all of us parents were getting our kids into a new routine. And you try to plan for everything. But no one could plan for an accident like this. It’s tragic.” 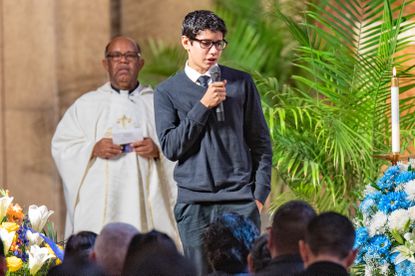 Enzo’s pre-K teacher, who identified herself as a representative of the school and later asked not to be identified, told mourners, “the family of PS 316 is strong.”

“When Mary told me she was pregnant with Enzo, I was so excited for her,” she said.

"I was his pre-K teacher. I felt so honored that I got to be a part of his life in that way. This is every parents worst nightmare. But we ban together as a family, we’re here together. I hope that everyone keeps all those memories of him in their minds and their hearts, all those positive things. To Mary and the family, may god bless, protect, and help you recover. I know that you will band together as a family and make it through.” 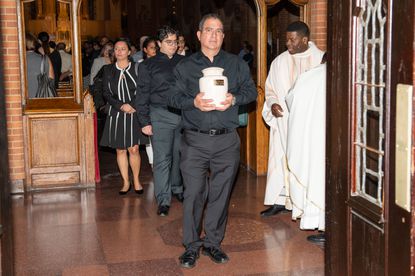