They call themselves New York’s Best — but when it comes to pay, FDNY EMS members say they get the least.

At a raucous rally Wednesday outside City Hall dozens of city medics and their supporters called on Mayor de Blasio to close the long-standing pay gap between Emergency Medical Service employees and other uniformed workers like firefighters and cops.

City emergency medical technicians and paramedics earn base salaries that are sharply lower than their FDNY firefighter colleagues — even though EMS responds to roughly 1.5 million of the 1.8 million emergency calls the department gets annually.

Shragi Schupak, 35, who has worked with EMS for more than 12 years, said he logs nearly 80 hours a week to support his wife and 4-year-old daughter.

“I would like to spend more time with my daughter,” Schupak said. “I shouldn’t have to spend a few hours a week with her. I sacrifice my weekends, I sacrifice my nights with them. At 4 years old all she wants is Daddy, and she can’t understand that Daddy can’t be home because Daddy has to work." 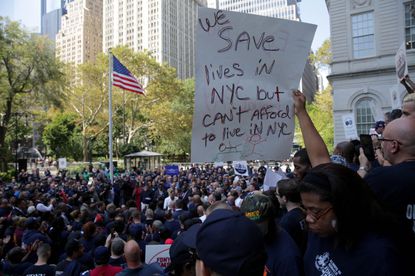 Joined by community activists and a religious leader, the emergency workers described the hardship of risking their lives for a city that doesn’t reward them accordingly.

“This work is just as dangerous,” said Christell Cadet, 34, a Queens EMT. “I’ve been spit on, attacked by patients and come in contact with deadly pathogens in some of the worst neighborhoods. And yes, I go into fires, I went into a fire to save an injured firefighter who needed assistance and yet we are not treated equal."

Mayor de Blasio, who styles himself as a champion for the labor movement and the working-class, has yet to bargain a contract with the EMS unions that would give a significant boost to their pay. He became a target for their frustration when he defended his position on the disparate salaries by describing EMS work as “different” from that of firefighters and cops.

Oren Barzilay, president of the union for EMTs and paramedics, said many of his members live in shelters, rely on food stamps and sleep in their cars.

Backed by Barzilay and Vinny Variale, head of the EMS officers union, the EMTs and medics chanted “Equal pay for EMS,” and cheered loudly when an EMS truck drove by and blared its horn.

Elected leaders vowed to close the gap, and urged the de Blasio administration to “do the right thing.”

At the rally, City Council Speaker Corey Johnson cheered along with the crowd and insisted “we are going to get this done,” as he extolled the hard work of EMS first responders, who roll up to fires, shootings, terrorist attacks and all manner of serious emergencies alongside cops and firefighters.

But he later added that any salary change would have to come through contract talks with the de Blasio administration.

“We at the Council don’t negotiate labor contracts, the mayor does that with his labor commissioner,” the speaker noted.