Pat Day, the chopper tour firm’s CEO, defended the company’s so-called “Pilots N Paws” program because he claimed it raised over $25,000 for animals in need.

“That was our sole intent and it’s unfortunate that some people have ruined a safe and successful fundraiser,” Day said in a statement. “However, while we strongly disagree with the characterization and allegations directed our way, we have decided effective immediately, we will not longer be flying dogs or animals in any of our open-door flights.”

Schumer welcomed FlyNYON’s quick change of heart. He also took a shot at the company over the March 2018 doors-off chopper crash in the East River that killed five people, which prompted two federal investigations that remains ongoing. 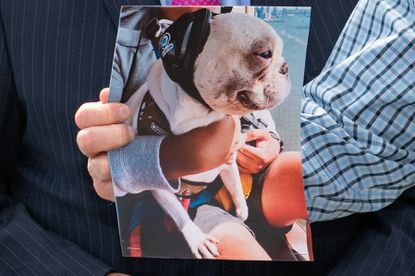 A promotional video for “Pilots N Paws” that spread across social media like wildlife over the weekend showed Instagram-happy customers bringing their pets on FlyNYON helicopters, strapping them in with harnesses and snapping selfies with them while dangling their legs over the Manhattan skyline.

FlyNYON initially insisted it was “fully compliant with all FAA operating and safety standards” and said “Pilots N Paws” had raised plenty of cash for pups.

Animal rights activists countered that such rides could be traumatic for dogs and accused FlyNYON of “animal cruelty.”