The e-biker badly hurt in a collision with a garbage truck appears to have driven into the truck as it was making a legal left turn, police said Monday. 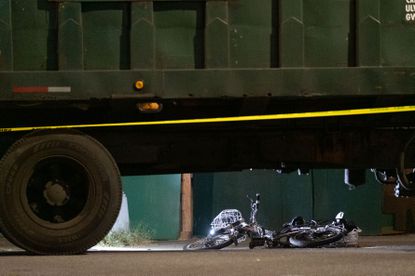 The 62-year-old victim is in critical condition at Methodist Hospital. The truck driver, off-duty FDNY firefighter Robert Blankenship, 32, was not charged. Blankenship was working an authorized second job, the department said.

Blankenship was driving south on the avenue had the green light as he turned left onto 12th St., police said.

The e-biker, riding north on 3rd on the sidewalk, drove into the crosswalk, at which point he collided with the truck’s front bumper.

The truck, which belongs to Pride Recycling and Demo, was carrying a Lomangino Bros. trash container.

So far this year 20 cyclists were killed in crashes on city streets, doubling the 10 killed in all of 2018.

State lawmakers recently reached a deal legalizing e-bikes and e-scooters but the law has not yet taken effect.