Dr. Anthony Fauci hit back Wednesday at what he called a “bizarre” White House smear campaign to undermine him, including a derisive unauthorized opinion piece from top Trump aide Peter Navarro.

“When the staff lets out something like that and the entire scientific and press community push back on it, it ultimately hurts the president,” Fauci told The Atlantic. “I cannot figure out in my wildest dreams why they would want to do that.”

The world-renowned pandemic doctor brushed aside the opinions of Navarro, a hawkish trade czar and foe of China who has no medical or public health background.

“I can’t explain Peter Navarro,” he added. “He’s in a world by himself.”

White House spokeswoman Alyssa Farah joined the circular firing squad when she claimed that the opinion piece does not reflect Trump’s opinions and “is the opinion of Peter alone.”

“Trump values the expertise of the medical professionals advising his Administration,” Farah wrote on Twitter. 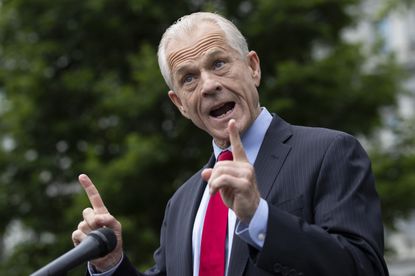 The president distanced himself from Navarro’s attack on Fauci, on Wednesday.

“(Navarro) made a statement representing himself, he shouldn’t be doing that,” Trump said of Navarro. “I have a very good relationship with Anthony (Fauci),” Trump told reporters.

Navarro has not commented on the controversial op-ed.

It's the latest broadside from the administration of one of the country's top health officials. Donald Trump himself has chastised Fauci over his caution about opening schools, though said this week the two get along well. Dan Scavino, another senior adviser to Trump, posted an image to his Facebook campaign depicting Fauci as "Dr. Faucet," washing the U.S. economy down the drain.

Fauci was once a ubiquitous figure in daily task force briefings, but hasn't spoken publicly at the White House since late April. Fauci has regularly been more candid in warning of the virus's risks, and the dangers of a hasty reopening, than Trump himself and other administration officials.

White House criticisms of Fauci have drawn pushback from Republican circles. "We don't have a Dr. Fauci problem," Senator Lindsey Graham, a Trump ally, said Tuesday in South Carolina, according to The State newspaper.

"The attempted trashing of his reputation by the likes of a kook like Peter Navarro is a disgrace," Tony Fratto, a White House aide under George W. Bush, tweeted Wednesday.

Fauci, speaking Tuesday before the op-ed was published, was asked about criticism bubbling up from the White House. “It doesn’t bother me. I have a job to do and I do it. I don’t pay attention to noise, I pay attention to substance. All of that is noise,” he replied.