A group of Democratic lawmakers are preparing to back a revenue package that could raise an estimated $30 billion annually by targeting billionaires and the state’s highest earners, and fund large-scale investments in a guaranteed right to housing for all New Yorkers, the Green New Deal and other ambitious priorities that progressive advocates want to see in the state budget.

The proposals, which include raising income taxes on the wealthy and reassessing levies on banks, hedge funds and private equities as well as scaling back corporate incentives, come as the state faces a potential $6 billion Medicaid-induced budget hole.

As part of the package, Sen. Brad Hoylman (D-Manhattan) will introduce legislation rolling back the state’s sales tax exemption for luxury yachts and private planes.

"Why on Earth should a billionaire get a tax break on the purchase (of) a yacht or a private plane?” said Hoylman. “That is not the 21st century approach to making certain we have the revenue for schools and affordable housing and mass transit.”

In 2015, legislative leaders defended the incentive being included in the state budget, arguing that the wealthy were spending money in others states because of similar incentives.

Assembly Speaker Carl Heastie (D-Bronx) and then-Senate Majority Leader Dean Skelos (R-Nassau) both championed the exemption as an economic boon. Heastie said last month he would support raising revenue before allowing any spending cuts to Medicaid or other programs.

“These kinds of wealth taxes protect the people we should be looking out for: hard-working New Yorkers who are living paycheck to paycheck,” he added.

The idea of increasing taxes on the ultra-rich has gained national interest in recent months as Democratic presidential candidates including Senators Elizabeth Warren (D-Mass.) and Bernie Sanders (I-Vt.) have proposed similar plans.

Sen. Jessica Ramos (D-Queens) said it was “unconscionable” that corporations and rich New Yorkers “have gotten away with paying next to zero, or very little, in taxes.”

“Essentially, there is a handful of us who are working very hard to find creative ways to close the state’s deficit in a way that doesn’t harm working families and a lot of that is just making sure that the state’s wealthiest New Yorkers pay their fair share in taxes,” Ramos said.

However, fiscal watchdogs have repeatedly cautioned against measures that specifically target the state’s highest earners, noting that their money makes them more mobile.

“High income taxpayer mobility is a real thing and it’s something to be concerned about. So to further increase taxes you have the possibility of encouraging those people to leave and take their tax dollars with them,” said David Friedfel, the director of state studies at the fiscal watchdog Citizens Budget Commission.

“Our first fall back isn’t ‘let’s raise taxes,’” Stewart-Cousins said last month as Democrats met to assess priorities for the upcoming legislative session, which begins Wednesday. “We know how the burden of taxes on middle class and low income New Yorkers is very difficult.”

Advocates are hopeful that new levies on New York’s highest earners will not only close the impending budget gap, but also help pay for long-sought progressive programs including public health care, transportation and housing.

“With fair, appropriate taxes on the 1% I think we can get tens of billions of dollars to close the budget gap and invest in our future," said Michael Kink, the executive director of the Strong Economy For All Coalition. “I think that’s a very responsible way to do it and it would be way more politically popular than cuts to frontline services and schools.” 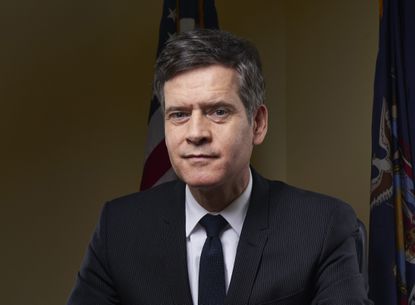