His plague isn’t quite ready, but the name of Firefighter John R. Elges of Ladder Company 134 is already etched on a work table at the Queens firehouse where he was revered.

On Monday, Elges, who died Sept. 15, 2018, of a 9/11-related cancer, was honored at a dedication ceremony for the plaque that’ll be installed at the Far Rockaway firehouse.

“The day of 9/11, we would always watch the names," recalled his widow, Nuala Elges. "And we always had an extra long hug on that day because I was just so glad that he was here with me. Not knowing that he was really dying.”

Her grief is still fresh almost a year on.

“When he died it was just—I mean, we all stick together, but we’re missing the most important element. He was the glue," she said.

Elges, father of four and grandfather of seven, was diagnosed with cancer five years before his death, his wife said. He was due to start radiation therapy the Monday after he died.

“When he got sick, he was so brave," she said. "It started off with just the throat cancer, then it went to his lungs and then went to his brain, and that’s what ended up killing him. So quickly that we didn’t even get a chance to say goodbye.” 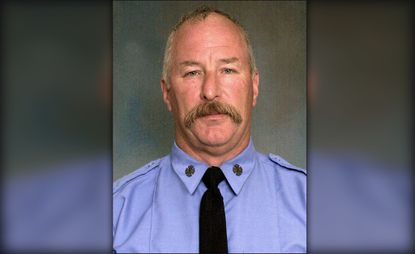 “When he came back from the pile, he said, ‘No matter where we are in our lives, I need to be in New York for this day,’” she said, her eyes filled with tears.

Elges’ widow plans to spend this 9/11 alone. On the one year anniversary of his death, she’s going to hold a gathering in their garden with friends and family and then bury his ashes.

“John was a kind, larger-than-life, gentle giant. And he was a teacher," he said. 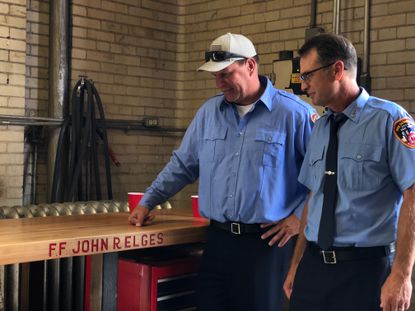 "First day I walked in the firehouse, he took me under his wing, and now I’m the lead seniority in the house all these years later. Everything he taught, I’ve tried to do with the new guys. He was—he was just a great guy,” he said, starting to cry.

“I truly miss him... Everything that happened with 9/11, we all went, we did our job, we would do it again, but it’s coming back now."

At a ceremony Friday, Elges’ name and 21 others were added to the 9/11 memorial wall.

“The commissioner was right,” Ormiston said. “He said we have to make the wall bigger because we have so many members sick right now.”

Studies have shown first responders exposed to the dust and toxins at Ground Zero have an elevated risk of cancer.

Elges’s son, John Robert Elges III, said the older firefighters at his dad’s firehouse are like uncles to him.

“They all embrace us like he embraced them. To have him up here is just—I got goosebumps thinking about it. You just can’t think of a better honor,” he said.

He said although it was a huge honor to have his dad’s name etched on the 9/11 memorial wall, the firehouse plaque is more special.