ALBANY — Bars and restaurants in New York City that fail to enforce coronavirus safety measures will be shuttered by the state if they rack up three violations, Gov. Cuomo announced Thursday.

Additionally, establishments statewide will not be allowed to serve alcohol unless patrons are eating a meal and seated at a table.

The crackdown comes as the governor lamented a lack of local enforcement and said the city is doing a poor job staying on top of large crowds congregating outside bars and eateries.

“That is a primary area we’re seeing problems with compliance. “There is significant evidence of failure to comply,” he said during a call with reporters Thursday morning. “The state itself has looked at more than 5,000 establishments in downstate New York and found many cases of failure to comply.”

Any establishment that receives three violations will be “closed for business,” Cuomo said, describing the crackdown as a “three strikes and you’re closed” policy.

“Egregious violations” will result in an “immediate loss of a liquor license,” he added. 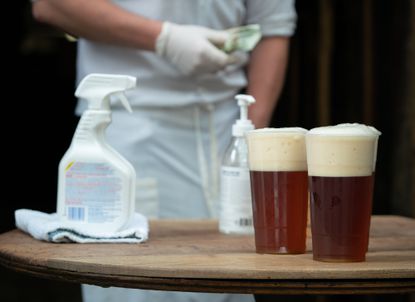 Cops and officials repeatedly found “large crowds directly outside the establishment, without masks or practicing social distancing” over the course of several weeks.

Cuomo said that another 14 New Yorkers died of COVID-19 on Wednesday and reported that 813 people remain hospitalized due to the respiratory illness.

While the city is on track to enter Phase 4 of the state’s reopening plan on Monday, the governor said it will do so without large indoor venues like malls and museums.

“We are still seeing issues, not just in bars and restaurants but all across the country,” he said. “You see this inside interior spaces, air-conditioned spaces where the virus is tending to spread. So we’re going to take that precaution in New York City.” 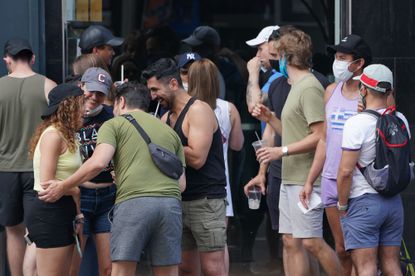 The state’s overall infection rate remains around 1%, with only 769 people testing positive for the virus out of more than 72,000 tests conducted Wednesday, but Cuomo warned that New Yorkers must remain diligent as cases surge across the country.

“Our numbers are good but ... what we’re dealing with is the potential of a ‘second wave’ from these other states,” he said.

New York has imposed a travel advisory ordering travelers from 22 states to quarantine for 14 days.

Cuomo said the state has seen a 92% compliance rate with people completing required forms disclosing their travel plans at airports, although he admitted that doesn’t mean they’ve complied with the quarantine. 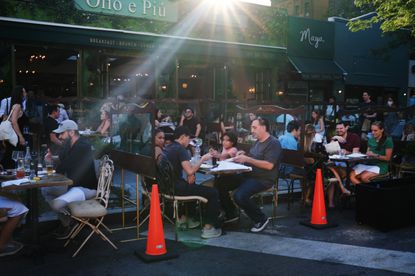 Houston mayor Sylvester Turner joined Cuomo on the call as the governor announced New York is sending supplies, testing kits and PPE to the city as cases continue to rise.

New York sent a similar shipment of supplies to Atlanta a day earlier.