Cuomo announces L train construction is three months ahead of schedule, will wrap up in April

Construction on the L train tunnel is chugging along at a rapid pace, Gov. Cuomo announced Sunday.

The governor descended into the subway line’s East River tunnel to tell reporters that construction on the Hurricane Sandy-battered tube is going so well that the work will be all but finished by the end of April 2020.

The project was previously scheduled to wrap up in late July at the earliest.

“The new ambitious goal is to have everything done and finished and the L train fully operational not in 15 to 18 months, but in 12 months,” Cuomo said atop a wooden stage set up in the tunnel’s northern tube. “We are already ahead of schedule by the current plan. If they (the project managers) keep working seven days a week and depriving their family of their presence and comfort, we’ll get it done by April.”

High-ranking Metropolitan Transportation Authority sources told the Daily News in April that the project could be finished in 12 months — Cuomo’s announcement publicly reaffirmed that projection.

Since late April, the L train has been running with drastically reduced service on nights and weekends to give crews space to complete the work. Under the MTA’s original plan, service between Manhattan and Brooklyn on the busy line would have been closed 24/7 for at least 15 months.

Cuomo in January announced a last-minute change to the construction plan after he reached out to the deans of the engineering schools at Cornell and Columbia universities. The academics floated the idea of using fiber reinforced polymer, or FRP, to cover the damaged sections of the tunnel’s bench walls, which for a century have encased electrical and communication cables.

The deans also told Cuomo that MTA engineers could rack cables on the wall of the tunnels and encase them in fireproof material, a method that has been used in other subway systems across the world.

The idea to stick the cables on the wall was pitched as early as 2015 by executives from Snake Tray, a Long Island-based manufacturer of racks that are currently being installed on the tunnel. MTA bosses were not convinced of the idea, and instead moved forward with a plan to remove enough concrete from 35,000 feet of bench walls, enough to fill 580 large dump trucks.

Cuomo on Sunday bemoaned the MTA’s “bureaucracy” for not thinking outside of the box with the original L train construction plan. He was careful not to blame the international engineering firms who consulted on the now-nixed plan.

“The MTA picked those consultants,” said Cuomo. “Why did the MTA pick them? Why didn’t they pick new consultants? Why do you need a large international consulting firm that was only going to give you what they gave before?”

MTA contractors on Sunday said that roughly one-fourth of each of the two bench walls in the tunnel’s northern tube have been covered in the FRP wraps. Crews have also lined each bench wall with a fiber-optic cable that will detect any movement or deterioration in the structures, and have added a set of new pipes to speed up the removal of water in the tunnel in case it gets flooded again.

Come October, the MTA will begin work on the tunnel’s southern tube, and will have seven months to finish the job.

“Preventing another Superstorm Sandy-level impact is a major reason we’re doing this project to begin with,” said Janno Lieber, the MTA’s head of capital construction.

Lieber pointed out that his team has replaced 6,300 feet of track with “continuously-welded rail" that “allows you to run the trains faster.” 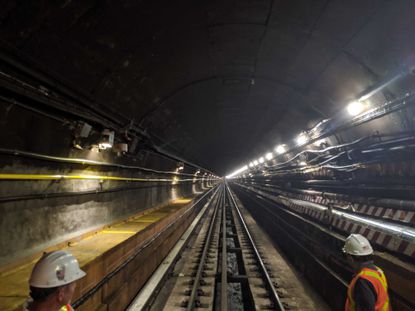 As Lieber notes, much of the L train construction work focuses on improving service rather than repairing the tunnel.

MTA crews are adding new substation to increase the electrical capacity on the L line, which will allow the agency to run trains more frequently.

The bulk of the demolition work in the tunnel during the L train project has been to shave back about three inches of concrete from the face of the bench walls every 250 feet, where protruding manholes slightly narrow the width of the tunnel. The extra width will allow trains to move slightly faster.

The signaling system on the L line is capable of handling 22 trains per hour, but the agency only has enough electrical capacity to run 20 trains per hour.

The electrical and structural upgrades will allow the agency to max out service on the line, and transit officials hope that a new signaling technology called “ultra-wideband” could increase capacity even further.

The new scope of the L train project is expected to save the MTA $10 million off of the original $470 million price tag, according to MTA spokesman Andrei Berman.

Some of the construction on the L line will continue beyond April, Lieber said. That work will mostly consist of ongoing accessibility and station improvements, which will not require any substantial changes to weekend service.