‘Could have been dead’: Brooklyn man left scarred after beaten by strangers with iron chain and his own cane

A Brooklyn man says he’s lucky to be alive after he was beaten with an iron chain — and his own cane — by a pair of strangers in a crazed caught-on-video attack.

Eugenio Santos, 44, was jumped by two men in the parking lot of the Associated Supermarket on Nostrand Ave. near Montgomery St. in Crown Heights about 6:15 p.m. on July 4.

Santos told the Daily News he was earning tips helping customers carry their groceries to their cars when a group of about six men hanging out drinking outside the store began harassing an older woman.

“There was a lady, she asked me, ‘Papi, help me out with my groceries,’ ” Santos said. “I was pushing the cart, we were walking.”

The men, he said, started calling the women racial epithets, including “black b---h.”

“I tell them, ‘Yo stop, respect the lady, she could be your mom,‘ ” Santos said.

The men told Santos to shut up and called him names in Spanish. He turned away — and felt a chain slam into his back.

Santos’ wife, Annette Freeman, said the attackers grabbed his cane and beat him with that, too. “He tried to defend himself with the cane, but then I guess they got it from him,” she said.

The woman Santos had been assisting fled back into the store.

The native of Puerto Rico, who has been with his wife for 12 years, suffered a broken arm and head wounds that needed 85 stitches and staples to close.

He was hospitalized overnight in Kings County Hospital’s intensive care unit and is now visually scarred as he recovers at home.

He said it still hurts to stand. His head throbs with pain. He has trouble sleeping.

Santos has been unable to return to his demolition job for more than a decade because of a chronic seizure disorder. Working for tips at the grocery store was a way to make ends meet. 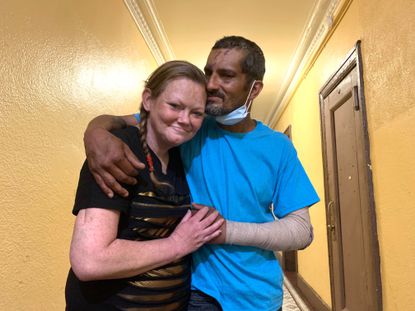 Once he was out of the hospital, the older woman’s son visited him and offered him some money to say thank you. “He hugged me,” he said. “I did it from my heart.”

On Saturday, cops released video of the assault, which shows Santos curling up as he’s beaten. They asked the public’s help identifying and tracking down the assailants but so far have made no arrests.

Anyone with information is asked to call Crime Stoppers at (800) 577-TIPS.