The unions, representing 60,000 members of the uniformed services, filed legal papers Wednesday in state court, and derided “an internet data dump” that would include “unproven and even uninvestigated” allegations and violate contract clauses.

“This is not a challenge to the public right to know. This is not about transparency. We are defending privacy, integrity and the unsullied reputations of thousands of hard-working public safety employees,” said Hank Sheinkopf, spokesman for We Are All New York, a union coalition behind the lawsuit.

The legal maneuver is the latest broadside in a running battle over the release of police disciplinary records that began in 2016, when the NYPD opted unilaterally - with support from the mayor - to cut off access to the outcomes of police misconduct cases that had long been available to reporters.

The department had cited the decades old section 50-a of the state civil rights law that said such records should be confidential because they could endanger officers. But the framers of the law argued the protection was never intended to make all personnel records secret.

Civil liberties groups filed a series of challenges that were rebuffed by several courts. Then earlier this year, the Democrat-controlled state Legislature passed a law ordering the release of disciplinary case documents under the Freedom of Information Law.

Mayor de Blasio subsequently announced a database of disciplinary case documents would be created and posted online. It was set to be posted Wednesday evening.

On Wednesday afternoon, however, state Supreme Court Judge Carol Edmead issued a stay on the public disclosure of documents issued before June 12 while the case is transferred from state court to federal court in Manhattan, records show.

The lawsuit describes the records in part as “unsubstantiated, unfounded, exonerated and pending” disciplinary cases which could “destroy the reputations, invade the privacy and imperil the safety” of uniformed employees. It does not challenge the release of records involving final disciplinary decisions. 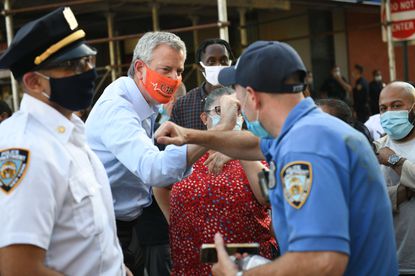 “This lawsuit defends the basic rights of individuals to privacy and equal protection, and the presumption of innocence unless proven otherwise after a lawful proceeding,” Sheinkopf said.

“An internet data dump—containing documents describing unproven unadjudicated allegations against innocent brave public safety employees, who dutifully go to work each day, and put themselves in harm’s way to protect New York City’s 8.5 million residents and 60 million visitors each year—is not fair by any measure.”