A handcuffed Brooklyn auto mechanic remained dead silent Tuesday after he was charged with murdering a bicycling bandit by slamming his speeding SUV into the fleeing man’s outgunned two-wheeler. 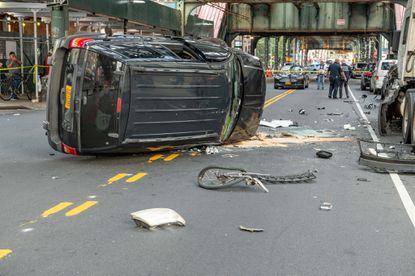 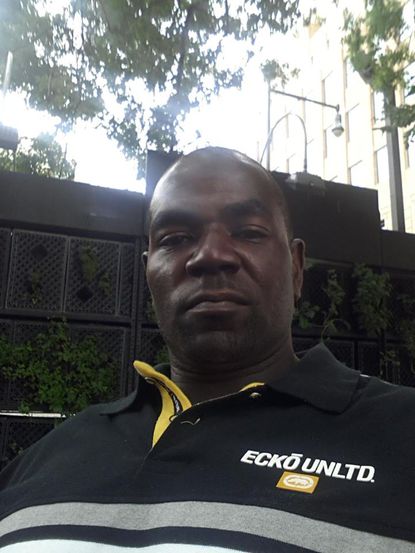 Korey Johnson, 41, licked his lips and stared straight ahead as he was marched from the 83rd Precinct around 11:30 a.m., charged in the caught-on-camera killing of fellow ex-con Donald Roberts, 47.

Both suspect and victim owned rap sheets of more than three dozen arrests before they crossed paths early Monday, when Johnson found Roberts trying to break inside his Jeep Grand Cherokee SUV on Marcus Garvey Blvd. near Broadway, cops said.

Johnson, who was with his girlfriend, flew into a homicidal rage after Roberts pulled a screwdriver and slashed at the Bushwick couple. The 20-year-old girlfriend was bleeding from a small wound on her arm as Roberts jumped onto his electric bicycle and zipped away after the 6 a.m. showdown, cops said.

The outraged Johnson and gal pal Renee Cassidy Puckett jumped into the SUV and chased Roberts down, ending the man’s last ride by plowing into the bicycle. The Jeep crushed the man against a row of parked cars and reduced his ride to scrap metal, while the SUV flipped on its side from the impact before skidding to a halt.

“That sounds like Donald, trying to break into a car and somebody runs him over,” said a neighbor of the dead man. “A chill ran through my spine.”

Medics rushed the mortally injured Roberts to Wyckoff Heights Medical Center but he could not be saved. Roberts, just nine months out of prison, was described by former Brooklyn neighbors as a drug user with a sketchy reputation.

“Like a lot of guys around here, Don ‘worked construction’ but he never really worked,” said another neighbor. “He was in and out of jail ... He was supposed to be in rehab. That’s why he was robbing cars.”

The dead man, whose rap sheet includes 38 prior arrests, was most recently busted just two months ago for breaking into a parked car on Flushing Ave. in Brooklyn, just a short distance from the scene of Monday’s mayhem. Among the charges brought against him over the years are robbery, burglary and criminal possession of stolen property.

He was also arrested four years ago for popping a car trunk outside the 75th Precinct stationhouse in Brooklyn and making off with a suitcase containing a police officer’s uniform, loaded gun, badge and bulletproof vest, authorities said. Roberts was released from prison on Dec. 5, 2018 for that 2015 crime.

Johnson’s mother said he was a “good son” despite his legal troubles.

“He was was my son and he was a good son," said Evelyn Roberts, 69, at her Bedford-Stuyvesant home. “I know he did things he wasn’t supposed to do but my son was a human being.

“He leaves a grown daughter and a young daughter,” she said. “We’re not taking this well.”

Accused killer Johnson’s rap sheet was even longer than that of the dead man, with 42 arrests on charges from robbery and drug possession to trespassing and criminal possession of a weapon. But neighbors recalled him as a gifted car mechanic with a solid reputation for helping those in need.

“This was probably a spur of the moment thing,” said Daniel Duncan, 30, of Brownsville. “He’s not an angel. But this is the worst thing he ever did. It’s very sad. It’s shocking.”

With Trevor Kapp and Mikey Light