A Bronx bodega owner, in a scenario straight out of “Pulp Fiction,” allowed her basement to become a chamber of horrors where a hostage was tortured and threatened for four brutal days, authorities charged Thursday.

Three suspects remained on the loose after cops arrested Orinthia Gifford, 49, and laid out the Tarantino-esque kidnapping and ensuing brutality in a three-page criminal complaint rife with terrifying detail. The hostage was threatened at different times with a knife, a machete, a rifle and a .9 mm handgun, and told by one of his cold-blooded captors that they intended to go after his family.

“I am going to rape your daughter, rape your wife, and kill your family,” one kidnapper told the terrified victim during the long, violent encounter. “I’ve killed before in Jamaica. I’ve killed two people in Jamaica by order.”

At other points during the ordeal, the kidnappers first threatened to set their prisoner ablaze — and then to execute him after putting a gun barrel into his mouth. 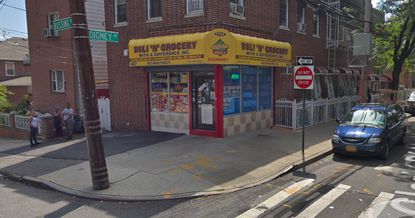 At another point, one of the trio declared “Yo, burn him” before the victim felt the flame from a lighter licking at his face, nose and ear. The man with the lighter later handcuffed the victim to a metal bar before departing amid a fusillade of menacing words.

NYPD Chief of Detective Dermot Shea said police were still sorting out the details, but it appeared that drugs were a likely motive for the insanity.

“It’s a strange case,” Shea said Thursday. “The victim is claiming he was held and beaten. We’re still trying to untangle exactly what transpired there ... Clearly the possibility exists that marijuana and money are at the heart of it.”

The victim, grabbed violently at about 7:30 p.m. last Saturday, was only freed on Tuesday night after cops spotted two of the kidnapping suspects smoking weed on the street. The pair fled inside the Deli N’ Grocery With A Difference, the store upstairs from the basement where they were holding the victim, the complaint said.

When cops asked suspect Richard Millward, 35, if they could search the place, he asked for a minute to run downstairs. Cops spied the victim, who quickly spilled his story.

The battered man was bleeding from his lip, covered with bruises all over his body and dressed in soiled clothes when cops rescued him from the subterranean nightmare around 9:45 p.m Tuesday.

Millward fled the scene as did the second suspect, with police still pursuing three male suspects in connection with the kidnapping. All three have lengthy criminal record, according to cops.

The victim had a lengthy rap sheet of his own, and refused medical attention once rescued, police said.

Gifford, 49, was ordered held on $75,000 bond or $50,000 cash bail on charges of kidnapping, assault, unlawful imprisonment and criminal possession of a weapon.

The victim identified Gifford, and she acknowledged her position as owner of the bodega, the complaint said. She also held a key to the basement, cops said.

The victim was jumped by the trio around 7:30 p.m. last Saturday inside a grocery store at 4222 White Plains Rd., then beaten and dragged into a waiting car. Authorities said he was driven less than a half-mile to the deli, where he was bashed in the head with a heavy object before he was dragged into the basement.