At least eight people, including 16-year-old Brooklyn teen, wounded overnight in spate of shooting across NYC

The city’s latest epidemic — relentless gun violence — continued to plague New Yorkers Thursday after at least eight people, including a 16-year-old teen, were wounded in separate shootings during a bloody overnight onslaught.

The boy was shot in the back on Avenue K and E. 43rd St in Brooklyn’s Flatlands neighborhood around 3:10 a.m. Medics rushed him to Kings County Hospital, and he was expected to survive. He was unable to describe his assailant, a police source said.

Both were taken to St. Barnabas in stable condition.

A short time later, around 12:30 a.m., a 40-year-old man on a bicycle was shot once in the right leg at E. Fordham Road and Valentine Ave. in Fordham Manor. He was taken to St. Barnabas Hospital in stable condition.

Just 30 minutes later, at the LaGuardia Houses on Jefferson St. in the East Village, two men were shot just before 1 a.m. A 21-year-old man was shot in the lower right leg. Medics took him to Bellevue Hospital, where he refused to cooperate with detectives, officials said.

A citywide alert led cops to the second victim of the Manhattan shooting — a 20-year-old man who walked into Harlem Hospital on his own with a gunshot wound to his right buttock. He was also uncooperative with police, officials said. Both victims were expected to survive. 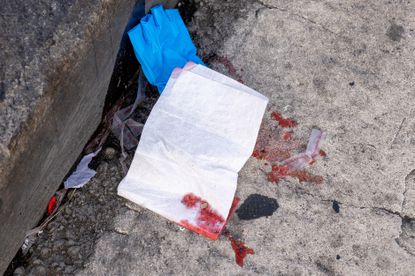 Meanwhile, in the Bronx, a 21-year-old man was shot four times in the left leg and once in the right leg on Prospect Ave. near E. 183rd St. in Belmont. Medics took him to St. Barnabas Hospital, where he was in stable condition. The victim told cops he was walking when two men approached from behind and opened fire.

Around 4:30 a.m., a 25-year-old man was shot once in the right leg and once in the stomach on Bronx River Ave. near E. 174th St. in Soundview. He was taken to Jacobi Medical Center in stable condition.

The Brooklyn, Bronx and Manhattan shootings did not appear to be connected, but they each had one thing in common — there have been no arrests.

Earlier this month, nine people were killed by gun violence across the city in a single day, July 5. Among the dead that Sunday was Anthony Robinson, 28, who was gunned down in a drive-by attack while crossing a Bronx street hand-in-hand with his 7-year-old daughter.

Last Sunday, a 1-year-old boy, Davell Gardner, was shot and killed while sitting in a stroller outside a park at a Brooklyn family barbecue. 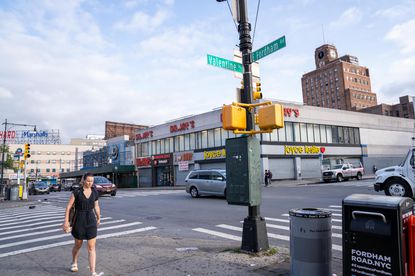 Last month, a promising college basketball recruit, Brandon Hendricks-Ellison, 17, was killed by a stray bullet in the Bronx just two days after he graduated from school.

At the teen’s funeral Wednesday, the Rev. Al Sharpton pushed for stronger gun control measures and said that before moving forward with the Black Lives Matter message, people in the Black community need to “teach it to each other first.”