An appellate judge temporarily spared President Trump from telling the truth, the whole truth and nothing but the truth about a 2015 clash between Mexican protesters and Trump Tower security forces.

State Supreme Court Appellate Division Justice Dianne Renwick, without providing any context, issued a Wednesday morning stay that blocked the plaintiffs from grilling the president in a videotaped deposition for a trial that had been scheduled to begin Thursday.

Renwick, in a terse one-sentence decision, also delayed the start of the lawsuit brought by the demonstrators.

“Application for an interim stay of enforcement of Justice (Doris) Gonzalez’s order dated Sept. 20, 2019, as well as a stay of the trial is granted pending determination of the motion by the full bench,” wrote Renwick.

Bronx Supreme Court Justice Gonzalez had ruled last week that “no government official, including the (president), is above the law.” She had also ruled that Trump would not actually testify at the trial, but would instead answer questions under oath during a videotaped Q&A that would be shown to the jury. 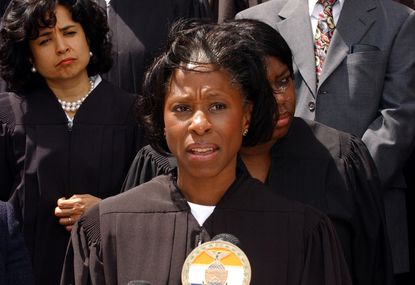 Trump’s legal team had previously argued that state judges lacked the authority to force a sitting president to testify. Unless there were “exceptional circumstances,” the lawyers argued, Trump’s official White House duties would preclude any summons to answer questions from the plaintiffs’ attorneys.

The 2015 demonstration outside Trump’s Fifth Ave. building was prompted by anti-Mexican remarks made by Trump at the start of his presidential campaign.

Five of the demonstrators filed suit alleging Trump Tower security assaulted them and snatched their protest signs during a lawful protest over the offensive remarks. The plaintiffs alleged that Trump security head Keith Schiller and his underlings acted at their boss’ behest.