Actress Amber Heard, who returned to a London courthouse Tuesday to testify against ex-husband Johnny Depp, denied fabricating injuries to incriminate her former partner and said she never cheated on him with Tesla CEO Elon Musk or actor James Franco.

The “Aquaman” star, sitting in the witness box for the second day in a row dressed in a white knee-length dress with her hair braided, brought a previously unseen photo showing her right cheek and eye apparently bruised from an alleged attack on May 22, 2016. She accused Depp of throwing a cellphone at her face that evening “like he was a baseball pitcher.”

The actor’s lawyer, Eleanor Laws, told Britain’s High Court that Heard made it all up, partly because no one else in the couple’s Los Angeles building noticed those injuries in the days following the incident. Laws also showed a series of surveillance videos from an elevator in the building that raised doubts about Heard’s claims.

The 34-year-old model said no one noticed her injuries because she wore makeup after leaving her home.

Although Heard is not on trial, her testimony is key to Depp’s libel case against a British tabloid that called him a “wife beater” in a 2018 news article. The “Pirates of the Caribbean” star sued The Sun’s publisher, News Group Newspapers, and its executive editor, Dan Wootton, for allegedly defaming him and hurting his career.

The paper’s defense team says the story was based on 14 incidents in which Heard accused Depp of hitting her in multiple locations — including Los Angeles, Australia, Japan, the Bahamas and on a private jet — during their tumultuous two-year marriage. 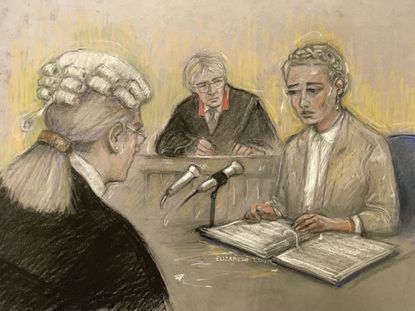 The pair officially divorced in 2017, a year after she obtained a restraining order against him. The 57-year-old actor and his ex-spouse have publicly accused each other of physical and emotional abuse for years.

During Tuesday’s testimony, Heard also denied an allegation that she had an “illicit relationship” with Elon Musk and James Franco, both of whom she described as friends.

Laws revealed in the courtroom that the Tesla and SpaceX founder once offered to arrange 24/7 security for the actress after she told him that Depp had attacked her. The lawyer read a text message that Musk allegedly sent Heard regarding the offer, according to the BBC. “The offer would stand, even if you never wanted to see me again... anyway, sorry for being an idiot,” the billionaire entrepreneur allegedly wrote. “The radio silence hurts a lot. It only matters because I really like you.”

Heard also denied a stomach-turning allegation that Depp made during his own testimony earlier this month. The actor had told the court that Heard or one of her friends left a pile of “human feces” on the couple’s bed after her 30th birthday party in Los Angeles in April 2016.

“That’s absolutely disgusting,” she said Tuesday. “I cannot fathom what adult would do such a thing.”

Heard claimed it was one of the couple’s Yorkshire Terriers who defecated on the bed, mostly likely one named Boo who once ate Depp’s marijuana and had been having issues ever since.

In another shocking allegation, Heard told the court that she once heard that Depp threw model Kate Moss down the stairs when they dated back in the 1990s. The actor’s lawyer questioned why she didn’t bring that up in her deposition.

Her testimony is expected to last through Thursday.