Alex Rodriguez, Jennifer Lopez simply don’t have the cash to buy and then run the Mets

The bidding is in the second and probably final round. What has become increasingly clear is that, for all their noise and celebrity, there is no way Alex Rodriguez and Jennifer Lopez are getting the Mets.

There are a lot of reasons for this, most of all they don’t have near the money of the two front runners, New York hedge fund tycoon Steve Cohen and New Jersey Devils/Philadelphia 76ers primary owners, Joshua Harris and David Blitzer. Recently A-Rod announced to much excitement that NFL Hall-of-Fame linebacker Brian Urlacher, Super Bowl champion Travis Kelce and 2014 NFL offensive player of the year DeMarco Murray had joined his group of investors, to which one industry insider noted: “That’s all you need to know about A-Rod’s bid. The last thing you want at this stage of the game is more investors. It just proves the point they don’t have the money, whereas a guy like Cohen [whose net worth is estimated at $13.8 billion by Forbes] doesn’t need any investors. Nor do the 76ers guys [Harris is said to have a net worth of nearly $5 billion and Blitzer $1.3 billion]. They can all buy the Mets on their own.”

But it’s more than just having the money to buy the team. It’s the money to then operate the team after shelling out the $2 billion-plus for the Mets and acquiring as much as $500 million in debt Mets owners Fred Wilpon and Saul Katz accrued in loans from the banks and MLB to bail them out of the Bernie Madoff investment scandal in 2008. No doubt, the amount of cash Wilpon and Katz wind up getting for the team will depend on how much of that debt they are willing to absorb themselves. But the major league owners are not going to approve any sale of the Mets for less than $2 billion because the sale price affects all their franchise values. As it is, like all the other owners, Wilpon and Katz stand to lose another $150 million in revenues this season as a result of the pandemic, which is why there is an urgency to complete this deal by October.

As of now, the sale price does not include SNY, which is worth at least another $2 billion but is also heavily leveraged in debt. Like all the other team TV networks, SNY is losing millions in advertising this year and conceivably could be a separate part of the deal. Wilpon and Katz, both in their 80s, own 80% of the network and would seemingly want to cash in on it as well. Comcast and Spectrum, who own the other 20%, are said to definitely want to divest themselves of SNY.

Since Cohen has the ability to pay whatever it takes on his own, and already has an 8% stake in the Mets, he appears to be a slight favorite in these sweepstakes despite a small contingent of owners who are opposed to him for fear that he’ll become another George Steinbrenner when it comes to spending. But it takes nine no-votes to block a potential owner and the vast majority of the owners are only concerned about their own franchise values and, thus, want the team going to the highest bidder, no matter who it is.

What nobody wants is another Frank McCourt situation with the Mets, as would likely be the case if A-Rod somehow got the team. In 2004, when Rupert Murdoch and Fox were seeking to sell the Dodgers, baseball commissioner Bud Selig steered the sale to McCourt, the Boston parking lot magnate, who’d been a disappointed suitor for the Red Sox after Selig maneuvered that sale to Marlins owner John Henry. McCourt, of course, turned out to be grossly underfinanced and proceeded to run the Dodgers into bankruptcy. When, in 2012, MLB was finally able to get McCourt out of the game, Cohen was reputed to be the highest bidder for the team. But that time, the owners were able to prevail on Selig to reject him (purportedly because of his guilty plea in a billion dollar insider trading civil suit). Instead, the Dodgers went to Guggenheim Partners after they brought aboard longtime Selig ally Stan Kasten as a front man, but they in turn proved to be just as big spenders as the owners feared Cohen would be.

“The last thing Met fans want is another owner who won’t, or isn’t able to spend on players,” another industry insider said, “and that’s what they’d get with A-Rod’s group.”

Meanwhile, A-Rod did himself no favors last week when he called for the players union to accept a revenue sharing system tied to a salary cap in the upcoming labor negotiations. Was this an attempt on his part to curry favor with the owners in his bid to buy the Mets? Whatever it was, players union chief Tony Clark was quick to respond.

“Alex benefited as much as anyone from the battles this union fought against the owners,” Clark said. “Now that he is attempting to become an owner himself, his perspective appears to be different and that perspective does not reflect the best interests of the players.” 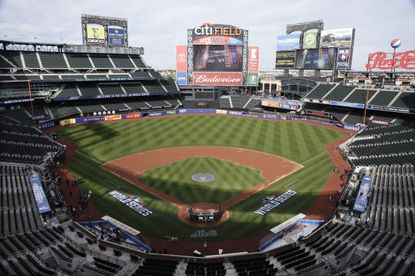 The fact is the owners were none too pleased with A-Rod either — particularly with his assertion that baseball has fallen behind the NBA, who he maintained has become an ”international conglomerate” and the NFL who he termed a “juggernaut.”

In the words of one MLB exec: “You really have to wonder what A-Rod was thinking. Kind of reminds me of MacBeth: ‘Tales told by an idiot, full of sound and fury signifying nothing.’”

Further complicating A-Rod’s ability to buy the Mets is the burgeoning $100 million civil suit filed in south Florida by his former brother-in-law, Constantine Scurtis, involving a since defunct real-estate partnership between the two. In December 2014, Scurtis, who is the brother of A-Rod’s former wife, Cynthia, alleged that A-Rod used their Newport Property Ventures Ltd. real estate company to commit insurance and mortgage fraud in the aftermath of Hurricane Ike, and also accused A-Rod of breach of fiduciary duty, civil conspiracy, unjust enrichment, tortious interference and essentially cheating him out of his ownership percentage and profits.

A-Rod’s attorneys have sought to have the suit thrown out, but recently Florida Circuit Judge Maria de Jesus Santovenia said the case will move forward and allowed Scurtis’ claim for punitive damages to be added to the lawsuit. Florida courts only allow punitive damages in extremely rare circumstances, indicating the judge must have found merit in Scurtis’ charges.

With all this, it’s a wonder A-Rod and J.Lo have been allowed to remain in the bidding for the Mets this long, but that can probably be attributed to both their fame and the desire of Steve Greenberg — managing director of Allen & Co., who is brokering the sale — to keep the bidding pressure on Cohen and the ’76ers owners.

In any event, the rest of the owners look at A-Rod’s pursuit of the Mets with bemusement. As one top MLB official said to me: “Everyone knows A-Rod doesn’t have the money, but even if he did, does anyone really believe the owners would approve a convicted and admitted baseball drug cheat, who sued the commissioner, sued the Yankees and sued the Players Association?”