A child might die because New York City’s bike-loving Department of Transportation has arbitrarily replaced one of only two life-saving exit lanes along a section of the FDR Drive service road that runs out of and alongside Waterside Plaza — a housing complex on the East River that abuts two schools and three hospitals — with a bike lane. 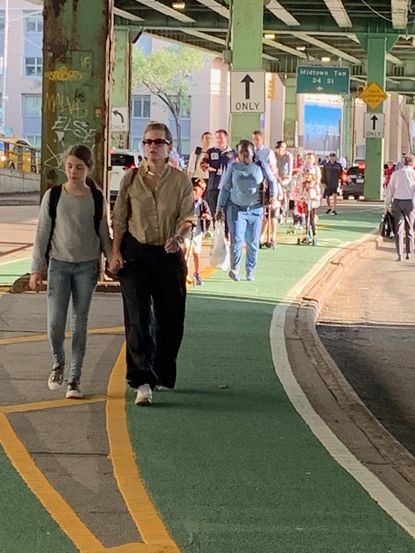 Now, kids who must use this path to get to and from the British International School of NY, the United Nations International School and the nearby River School are forced to maneuver between speeding bikes and oncoming traffic. As bad, EMS vehicles are often stuck on their way to one of the hospitals on the now-single lane egress.

This is because the DOT — despite different plans shown the Community Board — sneakily replaced one of only two exit lanes from Waterside Plaza, housing over 3,500 residents, (where I live), and one section of the FDR Drive service road with a crazily-placed shared bike/pedestrian lane.

Who, I asked, would accept the blame when the first victim of heart attack or stroke dies because the ambulance carrying him/her to NYU/Langone, the VA or Bellevue hospital is stuck in traffic on the one-lane exit?

What about when a parent or child is inevitably struck by a car or bicycle while maneuvering between the bike/ pedestrian and traffic lanes?

Who can we hold responsible for the dozens of M34A double buses and school buses that pass through here daily and are now forced to make dangerous, nearly impossible “S” turns while avoiding a huge concrete barrier, bikers and walkers?

Waterside resident Leslie Schatzer told me: “Just last week there was an accident at this location and we sat on the bus for 45 minutes and then were told to get off to walk to 34th and First. We were three senior citizens in 90 degree heat! It’s a crisis.”

Waterside, built in the 1970s, sits on pilings in the East River and is only accessible via a pedestrian bridge or the northbound (formerly) two-lane road which passes through the 23rd St. Skyport Marina, two schools and Waterside Plaza.

This worked perfectly for years. If it ain’t broke, for sure the city will try to fix it.

A life-long runner, Rosemary Rogers, told me, “The new skinny bike lane in the middle of traffic is most wrong-headed move I’ve seen in my 40 years at Waterside. I know bike lanes. A few years ago, on a run, I was hit by a Citi Biker in Midtown. I got a massive shiner and hematoma. I will definitely avoid that new path — too dangerous!”

Waterside Tenant’s Association president, Janet Handal, still upset over the sneaky slight of lane, plans to tell the mayor, if we can get him to come here: “The new bike lanes are dangerous, ill-conceived and poorly thought through. They could result in many more pedestrians and cyclists being injured or killed. The lanes are too narrow to for ambulances, so they can only use the remaining single vehicle lane.”

These lanes, mind you, were not just placed in traffic, but right under the dark FDR Drive overpass. Significantly narrower than shown to the Community Board, the new shared walk/bike lanes can’t even safely accommodate a twin stroller. What are parents supposed to do when they walk kids to school?

Yoga teacher/choreographer, Antonia Katrandjieva, just walked her 4-year-old to the River School for the first time. “Taking my child through the new bike lanes was scary and unsafe," she told me. "The lane is so narrow that we were almost run over.”

Meanwhile, there is a huge sidewalk along most of that area on the East River — perfect for bike lanes!

After I sent him my frustrated note, de Blasio wrote back that he was unaware of the situation, was going to look into it immediately, and would let me know. I’m holding him to it. We all are.